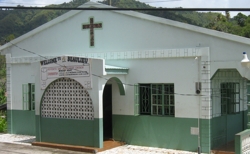 The Bealieu SDA Church came into existence almost thirty years ago. It emerged as a result of members from La Mode and the surrounding areas who attended the St George’s SDA Church, some 3 or 4 miles away, who recognized the need for a place of worship that was closer to home.

It was zeal for the Lord among these early members that sparked their interest in Adventism, in the first place, and ignited a crusading fire that resulted in evangelizing their neighbours and friends. With numbers growing, it became obvious that a plce for worship had to be found. In 1980 a building constructed from bamboo was erected on a piece of land rented from the late Lionel Francis.

Due to its progress and achievement, “The Bamboo Chapel” family, in June 1984, leased a new portion of land from the late Nolly Charles. In January 1994 legal title was acquired to that site and a wooden chapel was constructed there.

In 1998, the work of replacing the wooden building with the present concrete structure began. With astute leadership from Pastors Clinton Lewis, Loe Flery, Ashton O’Neal, Frankie Noel, Brothers James Strachan and Edward Guilluame and with a grant from the Grenada Mission of SDA, the current building became a reality.

Today the church has a membership of over two hundred (200) members. The church today is involved in warfare against the devil under the leadership of Pastor Charles A. Gittens.

Seventh-day Adventist beliefs are meant to permeate your whole life. Growing out of scriptures that paint a compelling portrait of God, you are invited to explore, experience and know the One who desires to make us whole.